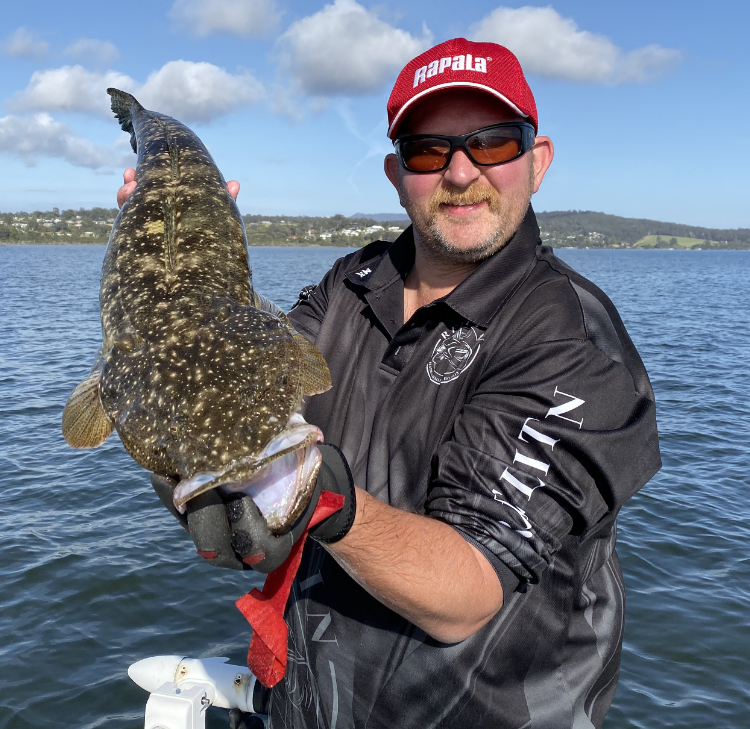 From a young age Troy had a love for fishing at his old Victorian stomping grounds of Lakes Entrance and Ocean Grove –  whether land based fishing or hiring a boat he would always be out casting a line. Then camping, fly fishing and spinning up rivers for Trout became a new passion.  Later, after buying his first boat (a little tinny called “The Kipper”) he would be out fishing 3-4 days a week chasing Snapper in Port Phillip Bay and the mighty Mulloway in Western Port Bay.

Troy start filming his fishing trips and big catches and the REEL IT IN Youtube channel was born. After teaming up with good mate Scott Wakefield, they became hooked on Estuary fishing particularly at Mallacoota, chasing flathead and Bream using the humble frozen prawn. BUT then soft plastics became a huge hit and both Scott and Troy became obsessed with one thing – catching BIG MUMMA FLATHEAD.

It didn’t take Troy long to land his first trophy flathead at Narooma measuring 92cm and then regular BIG FLATHEAD became the norm for them both. REEL IT IN then started out on social media and their Youtube channel grew to become a popular channel for fellow fisherman who shared the same passion. From there the REEL IT IN Flathead Challenges began with anglers all over Australia participating in them.

REEL IT IN has created a huge supportive community of passionate anglers and the boys are more than willing to help anyone land that Flathead of a lifetime. The hunt for the legendary 1 meter Flathead drives Troy to fish hard. Gut wrenchingly Troy lost one boat side and will continue to chase that elusive Unicorn Flathead. 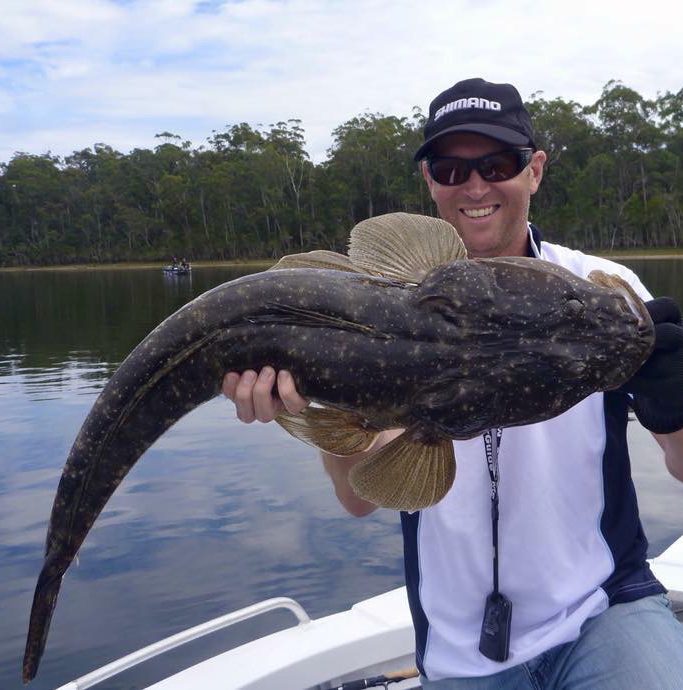 Scotty kicked off his passion for fishing in his early teens and back then, it was mainly focused on spinning and fly fishing in rivers for Trout.
In the late 90s, like many others at that time he was taken by the soft plastic revolution. That first trip to Mallacoota with good mate Troy Eaton started the passion for Dusky Flathead. The two guys still laugh about some of the stories from those days and just how inexperienced they both were. Trying to learn to catch Live Mullet and trying to get those strange squishy lures to work.  It took some years to nut this species out and for Scott to land his first big flathead, but once the monkey was off his back, with the first over 90cm coming from Wagonga Inlet some time ago, Scotty was landing them with consistency.
He loves throwing BIG plastics at these fish and believes the old saying “big lures equal big fish” and has the runs on the board to prove it
In 2013 after a few years of filming with Troy for REEL IT IN,  the two began the first REEL IT IN Flathead Challenge held at Mallacoota. The event was about getting away with mates and having a ball, whilst chasing their favourite species. It has now become an outlet for many that enjoy the weekend away with good mates. 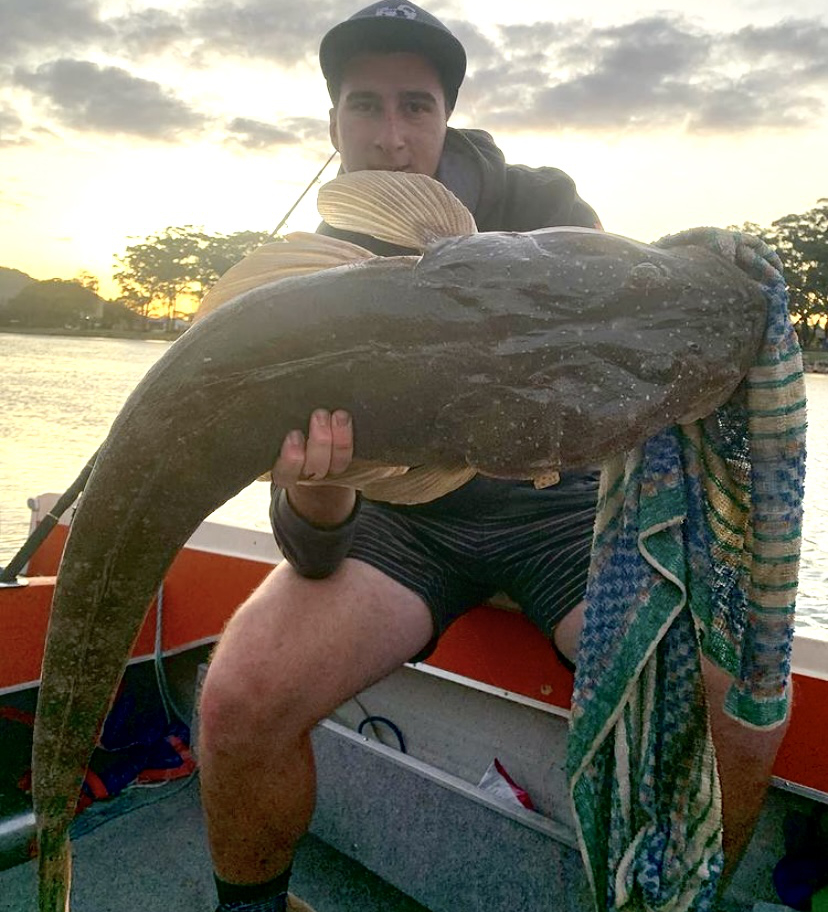 Brice lives on the Mid North Coast, and is a Primary School Teacher. As a kid growing up, he developed a prolonging health condition in his ear which had significant impacts on his schooling, social life, overall development and health leaving him with 20% hearing in one of his ears. This condition also impacted on activities that he could or couldn’t participate in. Two of them were swimming and sports. From this early age, his father and a teacher who supported me through these hardships introduced him to fishing, and from there, his passion and you could say addiction took off. Brice says that fishing is an outlet for not only his own, but also his mates’ mental health. Brice targets various species but Flathead and Jew are among his favourites, and he likes swimming big live baits for them or using big plastics/hard-bodied lures. Bass and other freshwater species are some of his favourites as well.

Brice quote. “The boys from Reel It In promote fantastic messages regarding fish handling and encouraging catch and release. Plus, they run the best comps! The boys and I got chatting, and I was very keen to jump on board to help promote their fantastic products as I already use many of them, but also to share their love and passion for this awesome sport as well. This industry is forever evolving and growing, but one thing that sets this team apart from the rest is that they are willing to help you and assist you with tips and tricks in anyway way they can. Also, through their laid back and genuine nature, they take the time to ensure their products or competitions provide you with deserving experiences and memories that will last a lifetime. It is just important to remember only to take what you need, plus I think there is no better feeling then watching your catches swim off to fight another day, especially the Big Crocs!”
Follow Brice’s captures and story at
Instagram- Fishin4Pics YouTube- Fishin4Pics Facebook- Fishin4Pics 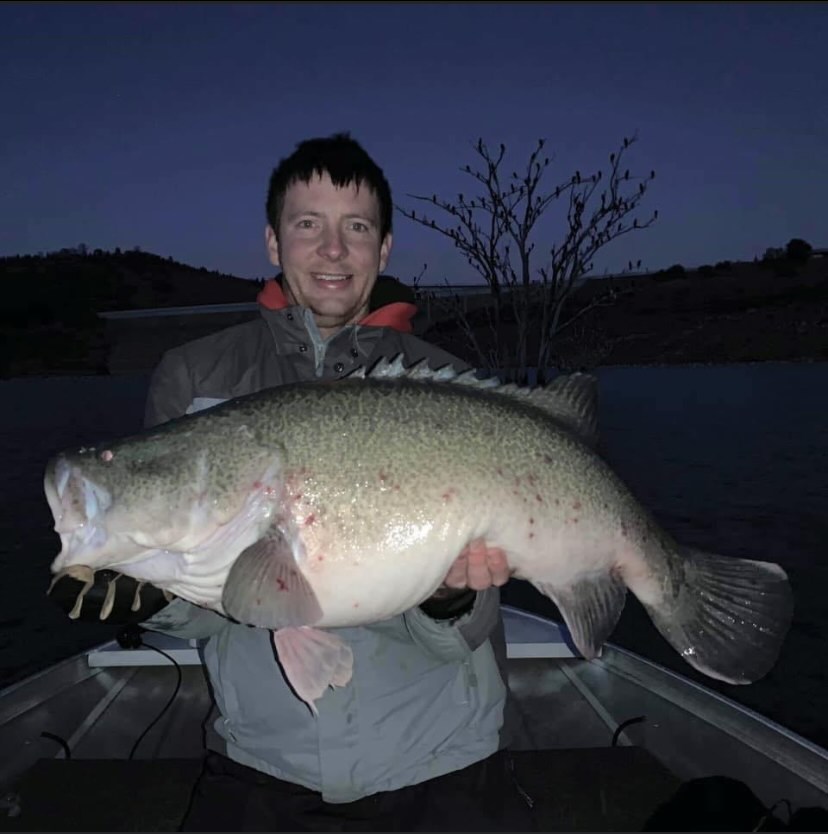 Nathan’s been hooked on fishing for most of his life.  Based in Tamworth NSW, he is lucky enough to have multiple species of fish to chase. His favourites include Golden Perch, Trout, Bass and Murray Cod.

Nathan is a gun angler in the fresh and at 24 years old has accounted for many trophy fish.

Nathan has recently been testing some of the new gear from the REEL IT IN range against some of our amazing native species and the results are exciting to say the least.

Quote from Nathan. “ I love the release that fishing gives. To get away and really take in the serenity. To share stories of catches with like-minded people. Most of the time the fish are a bonus.

My favourite part of fishing is one day I can be hiking gorge country chasing fish and the next day taking the boat out in an impoundment or even kayaking river systems, the options are endless. I love taking pictures and videos at times of not just fishing but also the environment. Some of the places I go are breathtaking.”

ABOUT REEL IT IN FISHING CHALLENGES

​
From humble beginnings in 2009, the Reel It In Flathead Challenge hit its straps in 2013 to include 55 anglers and since then has gone on to become Victoria’s premier Flathead event. The Mallacoota event held in November 2017 was full by mid July, some 4 months early, and saw 240 anglers battle it out for thousands of dollars in prizes.

A second calendar event was announced for Lake Tyers in 2017 which has also become a favourite of many.
​
In 2019 we are excited to be a part of the famous Narooma Flathead Challenge. This event will be the 9th time Narooma has hosted this very challenging but rewarding weekend.

Your teams best 10 flathead over Saturday and Sunday within the assigned fishing times are photographed on the supplied Bragmat along with your team’s numbered keyring. ( also supplied).

Each cm is worth 2 points. For example a 47.5cm flathead will give your team 95 points.

The team with the winning length over the 2 days will be crowned winners.
The 2017 Mallacoota winners “Coota Time” walked away with some amazing prizes including a team prize of a $2000 boat wrap from Form a Sign. Each angler of the team also took home a Shimano Stella FI 2500 and Shimano Zodias Rod, a pair of Tonic Eyewear and as is tradition from the early days, a bottle of Johnie Walker Blue label.

Team prizes in 2017 were given to the top 10 finishing teams and included some great gear from many great Sponsors.

Prizes were also awarded for longest Flathead each day as well as a host of different categories.

With door prizes galore the event was a huge success and promises to be even better in 2018.

The Shimano Reel It In Flathead Challenge is also a proud supporter of Beyond Blue and last year through the kindness of all involved raised over $2000 for this great cause.

Entry to all Reel It In Fishing Challenges can be made directly on this website. To view our up’n coming events and register, click the button below!